A letter from -Viggo Mortensen

The Mount Rushmore National Memorial, in the sacred Lakota He Sápa (Black Hills), was created by sculptor Gutzon Borglum nearly 80 years ago.

He had previously been hired by the United Daughters of the Confederacy to carve out of Stone Mountain, Georgia, a “shrine to the South” – an enormous sculpture commemorating military icons of the Confederacy, including generals Robert E. Lee and Stonewall Jackson. He became involved in Ku Klux Klan politics, joining them for a torch-light ceremony atop Stone Mountain in 1915. It is notable that for the next 50 years, until 1965, an annual Labor Day KKK cross-burning ceremony was celebrated up on Stone Mountain.

Like Mount Rushmore, Stone Mountain, prior to European occupation and seizure of the property, had been a sacred Native American site. In the case of Stone Mountain, when Europeans first learned of the place in 1567, it was inhabited and venerated by the Creek and, to a lesser extent, Cherokee peoples. 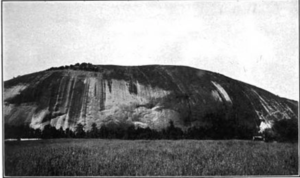 Mrs. C. Helen Plane, a charter member of the United Daughters of the Confederacy who had been instrumental in advancing the Stone Mountain project, welcomed Borglum at the Atlanta train station and took him to the mountain for an exploratory visit, introucing the sculptor to the owner of the property, Sam Venable, an active member of th KKK. After the release of D. W. Griffith’s Klan-glorifying “The Birth of a Nation” in 1915, the revived KKK was riding high. Despite Borglum’s Klan connections, Mrs. Plane “would not shake his hand – he was, after all, a Yankee”. In a letter to Borglum, she had written about the proposed monument: “I feel it is due to the Klan, which saved us from Negro dominations and carpetbag rule, that it be immortalized on Stone Mountain. Why not represent a small group of them in their nightly uniform approaching in the distance?” Borglum, impressed by the vast granite face that would be his enormous canvas, gladly accepted the offer to create the Confederate monument. But things gradually turned sour between Borglum and his employers.

Borglum was dismissed from the Stone Mountain project in 1925, after it had stalled owing to financial confilcts with his employers and infighting within the Ku Klux Klan itself, the group funding a significant part of the project. An additional reason for Borglum’s dismissal was that he had accepted an offer to carve the heads of U.S. presidents in South Dakota – in particular of the Confederate South’s sworn enemy President Abraham Lincoln.

After many stops and starts, begining with the hiatus during World War II and then political complications following the 1954 Brown v. Board of Education ruling and the birth of the Civil Rights Movement, the work of a series of sculptors that took on the job after Borglum’s firing culminated in Stone Mountain Park, “as a memorial to the Confederacy”, which was officially opened to the public on 14 April, 1965 – exactly 100 years to the day after Lincoln’s assassination. 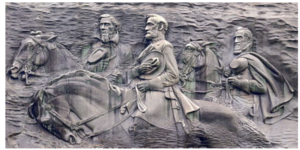 After the deadly Unite the Right rally in Charlottesville, Virginia in 2017, many people across the country began to call for the removal of Confederate monuments. Georgia State Representative and Democratic gubernatorial candidate Stacey Abrams called for the erasure, by sandblasting, of Stone Mountain’s carving. She called it “a blight upon our state”. As we know, the demand for Confederate monument removals continues to grow today as a result of the murder of George Floyd by Minneapolis police officers and the subsequent Black Lives Matter protests across the nation and around the world.

Although numerous tribal groups have insisted that President Trump cancel his Mount Rushmore 4th of July celebration, he will, of course, go ahead as planned, in yet another insensitive effort to sow division in the country and gratify extremist elements of his white nationalist base. Native American groups have long tried to get the monument of presidents Washington, Jefferson, Lincoln, and Teddy Roosevelt removed from the sacred Black Hills of the Oglala Lakota people. Recently, the president of the Oglala tribe, Julian Bear Runner, has ordered Trump to cancel today’s event. As he said to The Guardian newspaper, ““The lands on which that mountain is carved and the lands he’s about to visit belong to the Great Sioux nation under a treaty signed in 1851 and the Fort Laramie Treaty of 1868, and I have to tell him he doesn’t have permission from its original sovereign owners to enter the territory at this time”.

It is fitting that Borglum, a native Idahoan with white supremacist leanings who claimed to be worried about what he termed “mongrel hordes” overrunning the “Nordic” purity of the West, should have been tasked to create the gigantic affront to the Oglala Lakota people and to all indigenous peoples of the U.S. About Native Americans he once said “I would not trust an Indian, off-hand, 9 out of 10, where I would not trust a white man 1 out of 10”. That is the legacy that Trump is celebrating today, apart from his egomaniacal desire to be seen as a worthy heir to and member in good standing of the collection of giant heads of previous renowned Christian presidents of the United States of America, a country supposedly created as “one nation under God, indivisible, with liberty and justice for all”. As Nick Tilsen, president and CEO of the NDN Collective, a national organization dedicated to building Indigenous power recently said, Trump is “pushing these narratives of white supremacy, and he’s digging in deeper and deeper, using these symbols of grave injustice, and couching them as part of the great American story”. Tilsen, a member of the Oglala Lakota Nation on Pine Ridge Reservation in South Dakota, addressed native tribal views on Mount Rushmore and the Black Hills during his recent interview by Amy Goodman on “Democracy Now”:

“And so, the act of, one, stealing our land, and then carving the faces of four white men, who were colonizers, who committed genocide against Indigenous people, is an egregious act of violence. And then, furthermore, for it to be celebrated as the shrine of democracy, you know, some people just don’t know — people talk about Abraham Lincoln as being one of the better presidents in the history of the country. Well, you know, people don’t realize that, on one hand, he signed the Emancipation Proclamation, and then he also ordered the largest mass hanging in the history of the United States, when he ordered the execution of 38 Dakota people after the uprising in Dakota territory in southern Minnesota. 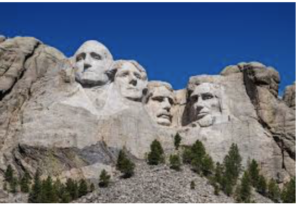 These parts of our history are the truth and the reality. This is an act of violence and aggression against us, and it’s also pushing this false narrative about American democracy, when we actually really should be uplifting the truths of what happened throughout history and how those truths are directly connected to the disparities that exist today in society amongst Indigenous people.”

From Perceval Press we wish all citizens a happy and peaceful Fourth of July weekend, and ask that you bear in mind the words of Oglala Lakota leader and holy man Heȟáka Sápa (Black Elk) after his visit to New York in 1866, following the devastating Civil War:

“I did not see anything to help my people. I could see that the Wasichus [white man] did not care for each other the way our people did before the nation’s hoop was broken. They would take everything from each other if they could, and so there were some who had more of everything than they could use, while crowds of people had nothing at all and maybe were starving. This could not be better than the old ways of my people.”

And, after meditating in the Black Hills:

“And while I stood there I saw more than I can tell and I understood more than I saw; for I was seeing in a sacred manner the shapes of all things in the spirit, and the shape of all shapes as they must live together like one being.” Heȟáka Sápa 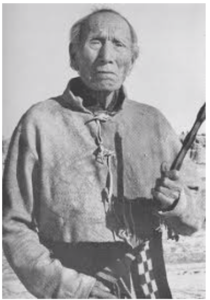