In 2018, some of the most damaging attacks are coming from government officials. Criticizing the news media — for underplaying or overplaying stories, for getting something wrong — is entirely right. News reporters and editors are human, and make mistakes. Correcting them is core to our job. But insisting that truths you don’t like are “fake news” is dangerous to the lifeblood of democracy. And calling journalists the “enemy of the people” is dangerous, period. ~Editorial Board of The New York Times, August 15, 2018.

Journalists are some of the most despised people on Earth. If you’ve kept up with world news, you know that many journalists are murdered while on assignment in other countries. Still, professional journalists continue to risk their very lives in order to bring news reports to the world.

Freedom of speech is guaranteed to citizens under the First Amendment of the United States Constitution. Specifically, “Congress shall make no law respecting an establishment of religion, or prohibiting the free exercise thereof; or abridging the freedom of speech, or of the press; or the right of the people peaceably to assemble, and to petition the Government for a redress of grievances.”

In addition, Article X, Section 1 of Constitution of the Rosebud Sioux Tribe outlines the Bill of Rights for Rosebud tribal citizens: The government of the Tribe including the community shall not … (b). Abridge the freedom of speech, press, expression, conscience, association, or the right of the people to peaceably to assemble, and to petition the government.

Journalists writing for both American and Tribal news outlets are guaranteed freedom of speech and expression. Yet, politicians at all levels of government would rather not answer questions asked by reporters.

Elected officials are put in office by the voting public. The public looks to journalists to be informed, not only about the political world, but about the myriad of other issues which concern us. Tax payers deserve to know how their dollars are being allocated by the politicians controlling the purse strings. Journalists are more than happy to publish information about how your tax dollars are spent.

Today, President Donald Trump’s credibility is basically nonexistent because of his ongoing, unfounded accusations against the newspapers and television networks who work hard to keep us informed of his every move. Journalists are doing their job in keeping the general public informed. After all, we all have a right to know what is happening with our government.

Still, it’s been quite obvious that the POTUS doesn’t want anyone to know what is going on in his administration. He has consistently accused journalists of being enemies of the people. He accuses many outlets of publishing fake news. He tweets daily posts on his personal Twitter account to distract us from his haphazard attempt to run this country. 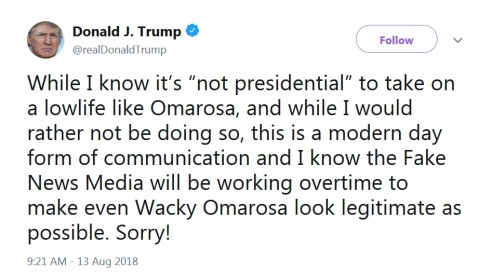 Journalists are a tough bunch. We understand that being accused of writing fake news comes with the profession. There is no better way to cast doubt on what is published by news outlets than to accuse them of writing something that isn’t true.

Perhaps POTUS believes that publicly accusing news outlets of publishing fake news, it would somehow get reporters to stop asking questions or stop writing news articles. But the President’s accusations encourage journalists to scrutinize his actions even more. Unfounded accusations results in reporters making even more effort to check all the facts before articles are published.

You know the story or editorial hits a nerve when you hear POTUS condemning the press on almost a daily basis. The goal of journalism is to report on issues that someone doesn’t want other people to know about. It’s a dirty tactic to accuse news outlets in this country of publishing untruths.

As long as our Constitutional laws guarantee our freedom of speech, journalists will continue to write the stories that someone doesn’t want you to read.