There are many National Football League (NFL) fans living on reservations. There isn’t anything wrong with following professional sports. In fact, NFL games are great entertainment. Many of us have no problem with professional football.

Last week, the US Supreme Court issued a ruling concerning the First Amendment right of free speech. This ruling basically allows any name to be used by sports teams, bands and other entertainment organizations, even if those labels are offensive. News reports state the ruling basically ends an 11-year legal battle to ban offensive mascot names brought by Amanda Black Horse (Dineh/Navajo) against the Washington Redskins.

Dan Snyder, who owns the Washington Redskins, is quoted by news outlets stating that the name was chosen to represent American Indians with “honor, respect and pride.” However, for many of us, the term “redskin” conjures memories of a time when our ancestors were murdered for cash. That is, bloody body parts of men, women and children were delivered to various state officials for payment.

Even though many of us work hard to just survive and have no time to join the ongoing battle, we still oppose the use of “redskins” as a mascot name. Gyasi Ross, a Blackfeet writer, echoed this largely silent opposition in 2013 when he wrote: “Many of us, even those who agree with that stance, are simply too busy keeping the lights on to worry too much about mascots. . .Most Native people have no inherent problem with Indian mascots; what matters is the presentation of that mascot and name.”

Thus, even though many support the movement against the professional football team using the word “redskins” in their mascot logo, we don’t have time to fight over it. Still, there are times when we must speak out against the continued use of the word “redskin.” Recently, members of my community were presented with information about a possible offer of playground equipment for our local youth by a donor affiliated with the Washington Redskins.

I’m not in favor of accepting any donations from the Washington Redskins. Those contributions could be viewed as support for a racist mascot name. For example, if we were to accept any kind of donation from them, they would likely say our youth endorse the “redskin” mascot name.

The Washington Redskins could state: “We understand you are offended by our use of the mascot name ‘redskins,’ but the children of Rosebud support us using the name because they accepted a donation of playground equipment from us.” This scenario might seem extreme, but it is still a possibility. 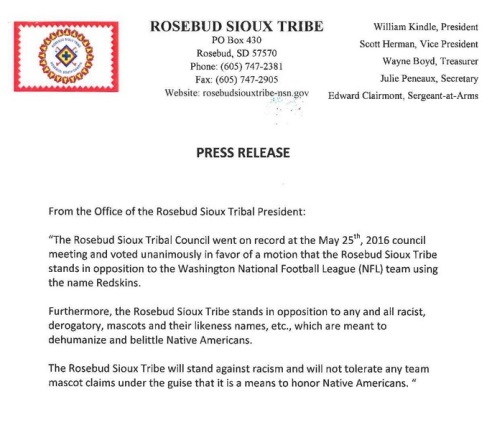 For many of us, the term redskin still conjures images of bloody body parts of our ancestors; specifically, human skin stained red with fresh blood. For instance, over 250 women and children were violently butchered by crazed soldiers at Sand Creek. Those same soldiers wore the blood-stained scalps, along with other bloody body parts cut from the murder victims, as trophies.

Our children would enjoy new playground equipment very much. They would also enjoy other activities offered by wealthy donors affiliated with the Washington Redskins. But those of us who carry the memory of our recent history in our DNA must stand by our principles. We must refuse to accept a handout from an organization which arrogantly uses the offensive “redskin” mascot name.

I challenge the tribal citizens who want to accept these donations to consider what our ancestors, especially those who journeyed to the Milky Way sans scalp or other body part, would say about it all.